This is not going to be a lengthy blog post you may be relieved to know. It is partly for my benefit, a log, which was the original reason I started my blog and partly to let you know about this. I also have more photos which I am not posting.

I first heard about and tried Sure Fit Designs a few years ago. I was desperately seeking a better fit than I got from RTW and balked at major pattern fitting issues. I didn't know how to do them - this was before I found a sewing class.

I sent off to America for the kit, which I have since updated, and tried it out with a modicum of success. Sadly, I didn't feel I could justify a trip to the US to join a retreat. I found Glenda extremely helpful (and still do) via email and photos. She also does Skype sessions as part of the DVD courses. I haven't actually taken mine up and am probably too late now.


Marked weight change and ironically starting a pattern cutting course and a dressmaking techniques course made me put it away.

Long story short, these classes had still not pointed the way to well fitting garments.

Last year, SFD became available in the UK through Judith, who trained under Glenda in the US. This meant I could buy materials without the extortionate postage, VAT and import duties which had cost me dear. Also, excitingly, there was the prospect of attending a retreat in the UK.

Recently I got the kit out again. I signed up for a dress kit fitting retreat over 3 days with Judith in Oxfordshire. I was still in Oxfordshire as I started to write this.

There were 3 other ladies on the retreat. Each of them was new to the system. Judith was aware I'd had some experience with the kit and was a little concerned that I wouldn't get full value from the course as day 1 starts basic with measurements etc. I reassured her in advance and said I just wasn't happy with where I'd got to. (BTW, I considered day 1 extremely useful and not at all a waste of time - I picked up some valuable hints.)

Judith had asked for some photos in advance and I sent her some fitting photos (not SFD ones). I appreciated the preparation she put into the retreat and she was well prepared with advice about how I should tackle my particular issues, confirmed on meeting me in person.

Briefly - I'm tall and have a long torso but a high waist.  I have uneven shoulders and a sway back. Judith felt I might have a forward sloping shoulder and a slight rounding of the upper back which would perhaps need to be catered for. I also have a relatively narrow back. I have a DD cup size but am fairly narrow across front chest.

The SFD system takes care of a number of these issues. There are a number of measurements both of length and width to determine shoulder points, bust apex points etc.

Judith marked my shoulder line and measurements were taken from that point. Right from the start she suggested I should make separate left and right sides for the bodice and I agreed. In addition, I made the front one size larger than measured and the back one size smaller.
So I made separate right and left front and back pieces. All of us at the retreat added shoulder darts to the back bodice, which Judith demonstrated and we practised before trying out on our own patterns. (I have photos of this too)

I won't go into the drawing up of the patterns. I'm happy to share more with anybody who wants to ask specifically. Basically our measurements are transferred using a template to a pattern which should then conform  to our measurements. There are loads of videos online too showing the system and giving walkthroughs of each step. They are very helpful tutorials. These are under the parent US site.

At the retreat, Judith demonstrated each step using one of the other attendee’s measurements.

Now, I've never had difficulty drawing up the basic pattern by transferring measurements. However, here the retreat was invaluable firstly because the measurements were more accurate than any I've had before and secondly because of the explanation given around how to interpret and use the sizes eg taking into account the shoulder blade fullness when measuring the full bust even if that measurement is not then parallel to the ground - this made my full bust measurement bigger than I had measured previously. Also extremely interesting was the discussion of using part of the template dart rather than the whole.  I had intended to reduce my front waist dart in this way but forgot when I was transferring marking; I feel I need a little more ease so will reduce the dart intake next time around.

I do struggle with 3D figures and the added complexity of having to do separate right and left sides made things a bit more difficult for me. I even managed to mark the wrong side of the fabric. Fortunately just the toile fabric! It meant it did take me longer than I would have liked.

It was clear when we measured the patterns to check sizing and ease that I'd need more biceps width and Judith showed me a potentially better way than I'd used previously. I didn't add enough though and my longer sleeve cap length foiled this method.

The skirt pattern and the bodice pattern were joined and double ended darts created but the waist seam removed. The skirt was cut off at thigh level. A toile was then made of the resulting pattern. I can show you photos of my first toile without sleeves.

There are no major issues here. Judith didn't feel I needed additional change for slight upper back roundness as the fabric was high enough at the back neck. I didn't sew my double ended darts very well hence the puckering - I pivoted sharply rather than change direction slowly. The hip area would be too tight over trousers, so more ease would be needed but this would be fine for a fitted dress. Also, these were full size darts and I think half size would be better. 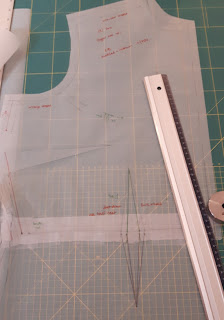 Unfortunately my sleeves were too tight. I let out the ⅝” seam allowances by about half. That helped a lot. However when I set the sleeves again it became clear that the sleeve cap was too short. The upper part of the sleeve on the right in particular was twisted, tight and uncomfortable. I thought I had a good photo of this but can't find it so I guess not.

Day 3
I cut out another sleeve and tried it out. This had a longer sleeve cap and widened biceps below but not at the junction between sleeve and armscye. However, I had too sharp a transition between the long sleeve seam top and the underarm point and it didn't sew well. The sleeve looked much better, no longer twisted, but there was insufficient seam allowance immediately under my arm. I knew where I needed to go, though. This was going to have to be at home.

The rest of the day was spent demonstrating what we can do with the body blueprint, which for me was actually the main thing I had wanted out of the retreat. Sure, I wanted a well fitting garment but I'm well on the way to that.

I had started with the idea that I'd take a commercial  pattern and modify it to suit my sizes. However, it's very much easier to take a copy of the body blueprint, which is an extremely basic design, and add the design features required.

I tried this out using McCall's 6028 which I intended to make up for our ruby anniversary. Judith was able to show me how to achieve this - my first try on my own wasn't right. I've been too busy to perfect my body blueprint so haven't yet drawn up the new pattern using it for this dress. I have some photos of my exercise here but think I will wait until I actually do the pattern.

Since my return home, I've been very busy with things other than dressmaking and pattern cutting.  I have drawn out a fresh copy of my blueprint, though.  I struggled a bit with my sleeve and armscye - having heightened the sleeve cap and added to the biceps width at the end of the sleeve (previously this started a full seam allowance below that), my sleeve was longer and therefore had much more ease than I wanted or felt I could ease in successfully. I asked Judith’s advice and she responded quickly. She suggested lowering the end of the armscye making it a little longer. This wasn't enough, however, and I had to do a little more.

Judith has commented that she plans to make changes to the way she approaches asymmetrical figures such as myself, especially with large biceps. She finds large biceps are commonly associated with the need for a longer sleeve cap; the fact that I’m 5’11” with long arms just adds to that need! She also has a couple of other refinements in mind. She feels that this might have allowed more time to perfect the sleeve within the time available; she is disappointed that I/we didn’t get there. I’m reasonably happy, though. I can work on my own and contact her if needed and know she will respond in a helpful and timely manner. I enjoyed the retreat and am signing up for her pants retreat later in the year.

I'm planning to make a toile over this coming weekend. Fingers crossed! I thought I'd post the first section though.