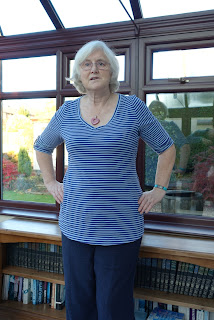 This time, I used the pattern pieces I had already altered to fit but had to further alter them to the required design.
I wanted the V neckline. Fortunately, Rory looked at the pattern and asked me if I really wanted the neckline that low. Needless to say, I didn’t and raised it by about an inch but could easily have raised it more.
I wanted the longer length with the split hem sides and the curved bottom hem so added the pieces back on to what I had, altering them to fit the rest of the pieces. I also had to alter the facings.
I decided to go for the sleeves with the tabs. 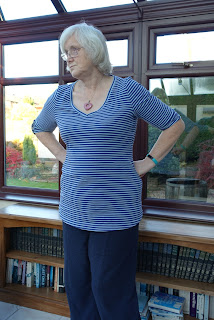 
First, the V neck. Yes, I would have preferred it higher than this but it’s okay - just that I realise that as I’ve got older, I prefer to be more covered up. I had open heart surgery to fix a congenital lesion in 2000 and at first I didn’t like to expose the scar. It’s fairly invisible now and doesn’t bother me at all - my issue now is, I think, just ageing skin and wondering who wants to see that! That and dislike of revealing bra or bra straps - that’s clearly an age thing as many youngsters don’t seem to care about this.


I pretty much followed the pattern instructions to construct the V neck. They were easy to follow. As my neckline was a different shape from the pattern’s - longer because of my height and the V higher because of modesty, the neckline band was obviously not the correct size. I did baste and measure, but in the end, my neckband is a bit longer than it should have been and the band is rather loose - more at one side than the other which is strange as the band was measured and put on symmetrically. I had gone ahead and overlocked the seams on the inside before I realised the extent of the issue but decided not to alter. I tried to steam the band to shrink it a bit and that perhaps had a little effect.


I think I stretched the band when applying, sadly.


The pattern recommends topstitching from the right side to hold down the inside neckline band. I was unable to do this even after several attempts - my machine just wouldn't have it! I had been using a zig zag stitch. Rory advised that as the neckline was fairly wide and would not be under any strain, that a straight stitch would work but to sample if first.  This worked! I was able to use my edgestitch foot which meant that things were kept straight. 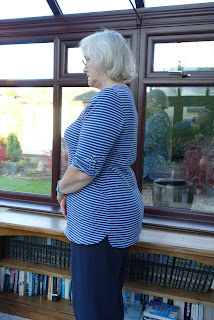 
I had to alter the facings because of the alterations I made to the original tee shirt pattern.. Perhaps because of this, but also because I intended to insert the sleeves in the round rather than flat, everything was a touch trickier - I had already sewn the side seams.


I managed to top stitch the hems in place using a large zig zag stitch.


I had to fiddle about to get the facings to end in the correct place. My front and back don’t seem to be at different levels (I thought back was going to be longer than front) so I’ve done something wrong somewhere. I need to adjust the pattern for the next time.


The pattern instructions have you insert the sleeves flat then sew sleeves and side seams in one go which would have been fine had I been happy with the sleeves.


I had altered the sleeve cap to give more height and in line with my previous alterations. When I basted them in place, I found excessive fabric and a couple of weeks back asked Rory to pin them correctly. A huge chunk of fabric was eventually removed. Much more from the back than the front as is usual for me.  I couldn’t actually remember (hangs head in shame) whether I had already adjusted the previous pattern for this - perhaps I hadn’t and this was the result, combined with the increased cap depth.


By this time, I had permanently sewn the sleeve seam and overlocked. I had not put on the tab at the suggested time as I knew the sleeves would need to be altered. I now turned up the hem and zig zag topstitched and sewed the modified sleeves in place, and overlocked the raw seams.


I added tabs separately. I simply sewed on a button, taking the thread through all layers. I have hundreds (thousands?) of buttons - who knows where they’ve all come from!! I remember as a child, playing with my grandmother’s button box. That was great - looking through all these buttons for a suitable pair was a bit more frustrating! I eventually found a pair. 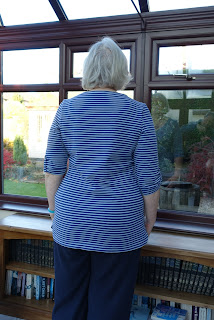 
I wore it to sewing bee today. It felt comfortable but the neckline looked really bad when I looked in a mirror after I had been wearing it a few hours.

Today was first day back to sewing bee because of my foot. Seeing these photos makes me realise just how long it is since I've had my hair cut! Way overdue but visit to hairdresser wasn't possible. Excuse my hair and my trousers which I wore because they fit over the moon boot.


My tutor there confirmed that it looked as though I had stretched the neckband more on one side (which she otherwise liked very much! she also liked the sleeve tabs). I had asked if taking up the shoulders would work but she said the issue was with the neckline not the shoulders. She didn't feel it was worth re-doing and suggested trying to shrink which of course I've already tried, as I explained to her.


E suggested I should give it to her if I don't get on with it - or even if I do! (Several things have gone on that direction in the past)


Verdict - imperfect but wearable. This is my first V in stretch fabric so I'm not beating myself up about it!

I'm doing this entirely from my phone so I'm not sure how well it will work. 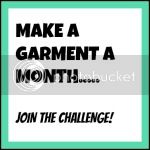