Helena from GrayDay Patterns asked for testers for her Sandpoint Top and I volunteered. There was quite a short turnaround but I didn't think I'd have any problem getting it done. I was pleased to be chosen to test and was allocated View 'A' which is the V neck version. I sewed size XL. The top has a cowl back but Helena was also interested to see if the top could be reversed.


My last post outlined the problems I had with the floral knit I used for Pattern Review's Winter Street Dress. While I was preparing fabric for this new top, I decided to go ahead and make the top in the floral fabric - I still had loads left. I thought that this would be the best indication to see if I could follow the steps required (I was testing the instructions too, as this pattern is intended for beginner sewers, which of course I am). I decided to sew the pattern in a straight XL with no changes whatsoever as this seemed the best way to test the pattern fit and to see if pieces joined together properly. Another reason I decided to sew a straight XL version is that I have pretty much lost my sewjo and thought this would be an easier way to get it back - none of those interminable fitting issues!


So I downloaded, printed and cut out the test pattern. I had no problems with this and it was nice that I only had to print relevant pages. I managed to tape the pieces together without incident.


There was one front and one back piece cut on the fold, plus 2 x armbands, 1 x shoulder band and 2 x neckband pieces for the V neck. I cut them out without incident - my fabric behaved impeccably at this point; I used a rotary cutter, which I most definitely prefer to shears.


I followed the instructions without problem. Except that my 4 way stretch fabric is so stretchy and has so little body that cutting into the stitching at the V neck wasn't really necessary and I found a hole at the peak of the V  and had to take rectifying measures. However, I managed to finish the V neckline - my first - and I think it looks pretty good (see above and last picture).


As the instructions were for small zig zag stitch or lightning stitch, I chose the former and didn't use my serger, which I think would make the insides nicer. After I had some problems with the fabric misbehaving and getting caught in the plate, I changed to a walking foot. Then everything went great. On a side note, this is the first time I have used the walking foot on my new Bernina and it was great - just so much quieter, smoother and easier to fit than the one on the Brother. After one of the sides caught, it grew a little and at that point I would have welcomed some notches, which weren't present in the test pattern - if I hadn't stretched the fabric, I wouldn't have needed them at all. As it was, I managed fine.


I was glad to have both pictures and written instruction for the shoulder band, which fitted without problem, and I trimmed as needed.


Within the test time, I have had a trip to Gleneagles, a trip to my mother's and then, most recently a two day trip to London to accompany my mother for pre-operative assessment and surgery. Some of you will know that my mother has Age Related Macular Degeneration (AMD) and is registered blind or rather partially sighted, as she would say. She has peripheral vision and can see specks on the ground but can't recognise faces, watch TV, read or cross the road, which require the central macular vision. She was found suitable for intra ocular lens implantation (which as I understand it recruits peripheral vision to do the things normally done by the macula)- and had her first eye (the worse of the two) done yesterday. There are a number of checkups, and she has to use various drops etc over the course of the next few weeks - but here's hoping she regains some vision. So, I accompanied her to London, for two days, and am helping her get used to moving around with even less vision than she had previously (there is hopefully a gradual improvement). She is pretty independent, though, and wants to go home tomorrow. We'll take her back (to Scotland) provided it looks as though she can manage the drops.


Anyway, all these things cut down my sewing time. I abandoned the idea of doing a second top in 'fashion fabric'.


I left to go to London with the neckband on, the sides seamed together and the shoulder strap attached and trimmed to size after a first fit. I had also pin attached the armbands - and there they stayed until last night. Although I was tired after our journeys, I was too uptight to think about going to bed early and seamed the armbands on. This went fine and as I still had some time, I decided to do the hemming, too. I followed the pattern instructions. I chose to finish with zig zag stitching. I also used zig zag stitching to keep the armband seam allowances flat. I should have done the V neckline too, but didn't at the time - as the seam allowances curl up a bit under the neckline, I may do this later.


I see that I will also need to do some internal trimming of the seam allowance portions beyond the zigzag stitching.


As I didn't make any changes whatsoever to the pattern, I was surprised that the top fitted quite as well as it did. It is a fairly loose top - just not quite so loose on my hips as it should be! Well, I'm pear shaped and unlikely to change from that very greatly. I usually prefer a bit more waist definition but this top is a nice departure for me.


I did try the top on with the cowl at the front - it looks reasonably okay unless you look closely and I think you can see some pulling on the left shoulder. I didn't like it with the cowl at the front - it felt too low and I would be constantly checking to see if my bra was showing. It also felt as if it pulled towards the front at the shoulders. You can see the different position of the shoulder band on the two images.

I'm not over keen on the shoulder band though I realise it is necessary. I think I will wear the top, with the cowl at the back. I like it a lot more than I thought I was going to initially. 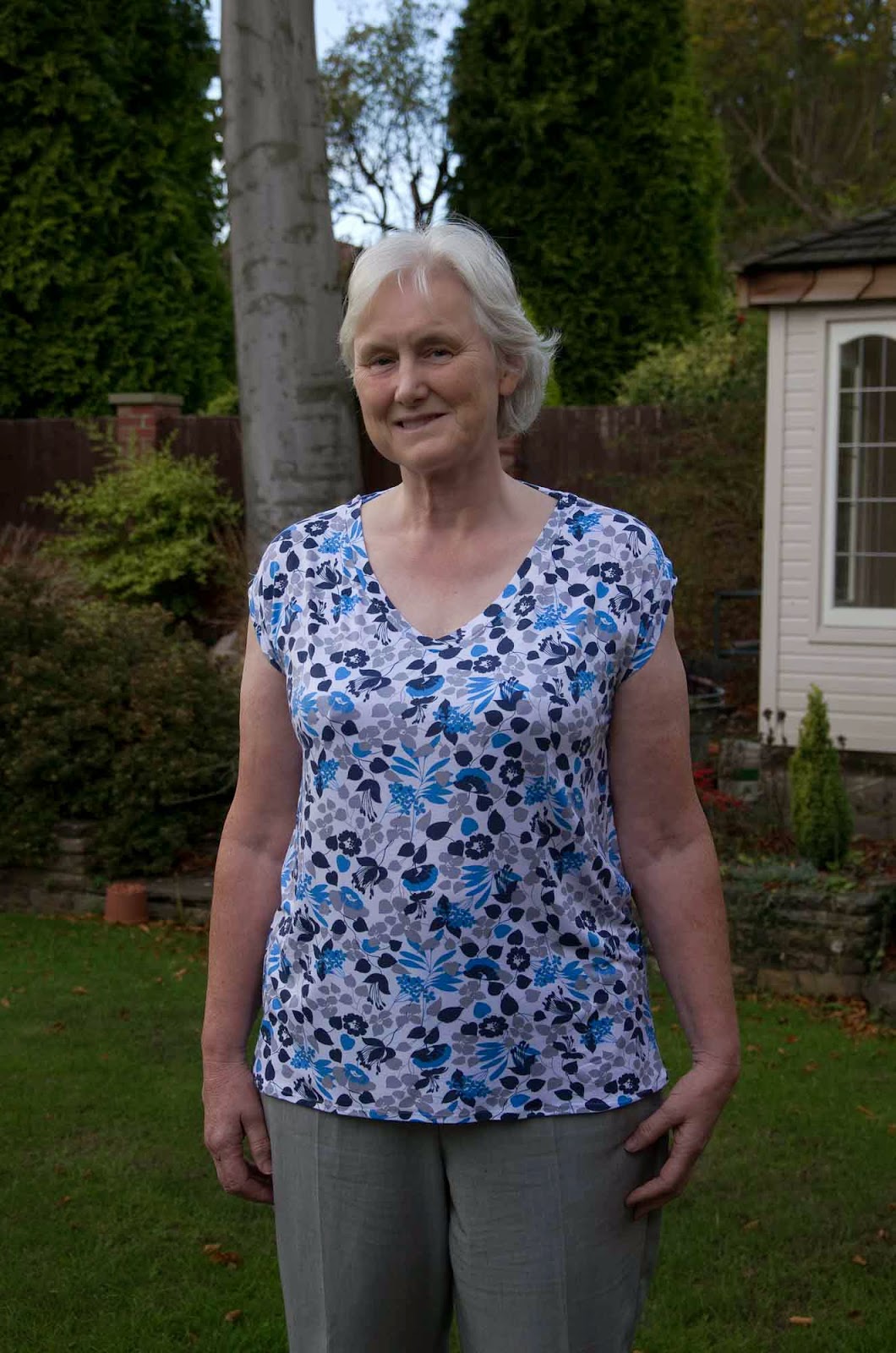 For the future, I want to finish the insides better and would probably use my (new) overlocker for many of the steps.
While I was in London , I had just enough time to pop into McCulloch and Wallis as it was near the hospital. I had never visited before. I had realised that London based sewers had more choice - but I just didn't realise how much more!! Many of the problems and much of the heartache (okay - I exaggerate!) I had with my recent wool jacket would have been solved very quickly with all the notions available in what seemed like an Aladdin's cave to me! The time I spent and the money on fuel - I might have been better paying for a trip to London. Thing is, although many places, including this, do mail order, if you don't know an item exists, you don't search for it and so can't buy it. I'm back in London again with my mother and again to go to my Bernina class so I might have a clear idea of what I want by then. Believe it or not, I didn't buy any fabric. I did get a sample of horsehair and a sample of very fine knit interfacing. Next time!!