I had a lovely time today at a sewing bloggers meet-up of the ‘Yorkshire Spoolettes’ in Dewsbury,  organised by Ali of Thimberlina, whom I had never met but felt I knew.

There were about 18 of us. Some I immediately recognised from photos on their blogs - others I didn't follow and so didn't recognise. A few couldn't make it, which was sad. I feared being too old for the group but don't think that was the case. I was made very welcome and met a group of lovely ladies. I'm gutted to say I didn't take any photos - but a few were taken on the day.

We met in Kenny’s cafe, introduced ourselves, had a drink and something to eat. Then we had a fabric and pattern swap. I took quite a few patterns but not so much in the way of fabric with me as I feared having to carry it home again if no-one wanted it!  I'm particularly thinking of a piece of fabric I bought as a potential patterned MOB dress - what on earth was I thinking of? The colours don't work for me and I dislike the fabric and can't really imagine anyone else liking it.  I chose a couple of patterns, in my size, so I may use them later ‘atw’ - after the wedding! More excitingly, I was persuaded (you know - arm up my back etc)  to take a jacket length of beautiful Linton tweed, brought by Margaret of the Crafty Creek.

I can't think of it just now but I promise I will make this up!!  I may have to compromise on sleeve length etc as being both tall and plus sized, I fear being short of fabric for the classical Chanel jacket. There were some patterns and some fabric left unclaimed at the end and I think Ali was going to pass these to a charity shop. So I wouldn't have had to take the fabric I mentioned back after all.

I'm doing a pattern hack of a dress with lots of drapes and tucks, the original made with a polyester jersey

and I wanted to buy some viscose jersey as I really didn't like the polyester jersey I bought - and others confirmed my view that it was really too sportswear/ dancewear. That and possible replacement MOB fabrics as I'm not 100% keen on anything I have and feel that my Indian dupion silk, beautiful as it is, is perhaps a step too far with my current sewing abilities and the time I have available.

We went briefly to the market to the trims stall and I bought some turquoise bias binding (20p pm) and a royal blue beaded trim (50p pm). Very inexpensive.

Our next stop was Fabworks. I was fairly focused here. I bought some grey viscose jersey for the hack dress 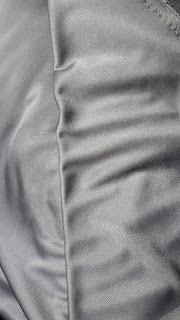 and bought some lovely blue crepe back satin recommended by Karen of the Sewing Miserablist, as she has used it and can vouch for its quality.


I loved the dress Karen was wearing, both the fabric (though not my colours) and the style. The fabric was still available in Fabworks but unfortunately not in an alternative colourway. Here is a link to the dress and fabric; I'd like to make the dress at some stage and was delighted when Karen said it was available for download (she made it from the Burdastyle magazine) and to boot was a tall pattern - she had to shorten it;  I wouldn't have to. Fabworks didn't have silk organza or stretch lining.

We then went to Lucky Fabrics. I love this shop! And the tea, coffee or juice and biscuits put on specially for us! I was less focused here. I bought a grey fabric just because I liked it

ditto a floral fabric - no immediate plans in mind. The self embossed stretch fabric I bought might do for the hack dress, though might be a little too thick. Again, I wasn't able to get any stretch lining.


I moved on to the £1 a Yard shop, mainly thinking of buying stretch lining,  which unfortunately wasn't available there either. I was taken by a crushed red velvet (what!?)  and copied Margaret’s purchase of a sewing related cotton, thinking of making a shirt. atw! 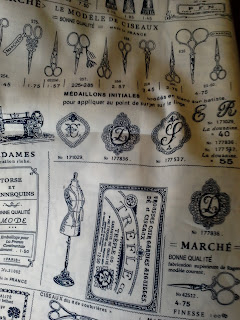 I didn't buy any additional lining fabrics as although very inexpensive, I decided not to add to my stash more than I had already! I already have several lifetimes of fabric in my stash.

Then we had a late lunch in Wetherspoons. As I wasn't driving I was able to have a pint of cider with my steak and ale pie, chips and mushy peas (Yorkshire caviare I was told today!). Then a quick photo and time to say goodbye - for now. I’ll be following new blogs, feel I've made new friends and feel inspired. Karen - I hope you got your car okay! Edited to say - I'm glad you got your car, Karen - what a relief. As Ali says, they'll get a good write up on her blog and a lot of kudos for staying behind.

I travelled by train as that I find is so much more pleasant than driving when it's raining and particularly as I started to read ‘The Forgotten Seamstress’ by Liz Trenow. 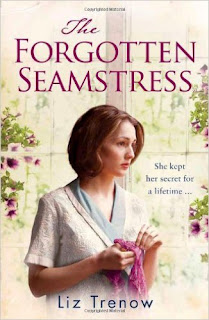 The character of the title was incarcerated in a mental hospital for having become inconveniently pregnant - I won't say any more as I recommend you read the book. I met one woman like this in the early days of my training, who had been incarcerated by her family for ‘moral insanity’;  such families wanted to avoid the disgrace and shame of having a sexually active (or just at risk of being sexually active) daughter. These women became so institutionalised that they were unable to cope with the outside world and unable to leave the mental hospital despite having been free to do so for many years, as was the case with the woman I met. Very sad. Such stolen lives.
https://blog.colettehq.com/news/colette-book-club-reminder#comment-185046
Coletterie is running a book club,  link above, and this book is this month's read, which is why I became aware of it.
I continued to read on the way home and finished it this evening.


Thank you,  Ali, for organising. I gather we have a month to show something we've made from out purchases! Hopefully, mine will be the hack dress.
at February 07, 2016