I love my Nettie bodysuit!

I'm pretty late to the game with the Nettie bodysuit by Closet Case Patterns - a pattern I seem to have had for ever! However, I finally took the plunge. I decided on this pattern as my project in my sewing with stretch fabrics class at Centre Front Studio, which has just finished. Other items sewn in class were pretty panties with lace waistband and lace edges round the legs, a Lycra leotard pant, a simple tee and of course several practice samples.

I downloaded the Nettie pattern and printed and stuck together with no issues, though this will never be one of my favourite pastimes! I also downloaded the sew-a-long. The pattern comes as a bodysuit and a dress (very short indeed for me!!) with sleeve and neckline  variations. I decided to make the bodysuit with long sleeves and high back and front necklines. I decided against the bra insert for my first bodysuit (there will be more!). I had the pattern in my stash for a long time and I noticed that the sizing had changed slightly after a certain date - trouble is I had no idea when I actually bought mine though I thought it was probably before the date given. I therefore decided to make the bodysuit using the  larger allowances on the basis that I could always take in if required. I made up to the size given for my measurements and it was just perfect! I won't need to change this for the next bodysuit, unless of course I use a fabric with less stretch.

As I’m 5” taller than the person the pattern was designed for, I increased the pattern length - but later had to shorten it again after making a toile. I ended up with the front longer than the original for my size but tapered to no increase at the sides and the back a little shorter in the centre, to accommodate my very curved back (a bit like a sway back I suppose), tapering to no reduction at the sides. These are not unusual changes for me but I was surprised at how long the pattern was. In addition, my tutor suggested adding quite a bit extra fabric to the back of the bodysuit at the bottom to provide more coverage there as the bodysuit narrowed quite quickly. I also had to lengthen the crotch extensions (?) - the sections that fasten between the legs. My lower torso is very long, however. I'm long from shoulder to bust, short from bust to waist due to a high waist and very long from waist down.

I mentioned that this was my class project, which I was doing in class, so I followed my tutor’s instructions rather than the sew-a-long instructions (which were very good). This meant that I sewed things in a different order and used different techniques. The main difference was to the finish at armhole and legs. Oh, and I then decided to miss out the sleeves as I thought the fabric pattern was too much to have sleeves as well - and I reckoned that as I’ve had so many sleeve problems recently I’d leave them off! So I had to finish the armhole edges too. My tutor recommended the same technique for all of these. I cut a binding, on the cross grain, the stretchiest direction, and attached this on the round to the neckline by sewing right sides together. Once I was happy with the length and stretch etc, I overlocked the edge with a wide stitch. This overlock stitch was then used as a guide to fold over the fabric to the inside where I pinned it. The edge was not turned in (almost a little like a Hong Kong finish at this point). I then used a zigzag stitch on top of the binding, the bottom edge of the zigzag stitch just touching the junction between binding and bodysuit. My stitching may not be perfect but it’s fine. Then the excess fabric in the inside was trimmed away - I got to use my nice sharp duck bill applique scissors for this. The armholes got exactly the same. The legs were slightly different as they were sewn open but also because they required different amounts of stretch at different bits of the leg. There is no elastic in any of these but the fabric is beautifully stretchy. I don’t have a coverstitch machine so that didn’t come into the equation.

I started writing this before I had quite finished the bodysuit - I still had to put the fastenings at the crotch. As I used high neck front and back, I didn't get away with just sewing a seam here though i did try! Having looked at the various options, I hoped to use a bra fastening - I didn’t have one handy which is why it took so long to be finished. I had to slightly modify the crotch extensions as one was wider than the other, so I unpicked and narrowed that one. I couldn't get a suitable bra fastener - I needed one with 3 hooks and eyes and I could only find 2 locally - too narrow. I tried corset fastening but that didn't work for me. In the end I used fabric extensions. I tried to use poppets (the kind you hammer in) but that didn't work either and in the end I resorted to hand sewing on poppets, which I preferred to hooks and eyes. It has worked okay but next time, I would slightly shorten the crotch extensions and I feel there is a bit of looseness.

I love this bodysuit and will make more. Perhaps with long sleeves as I originally intended next time. I love the height of the neckline so will probably stick to that but I won’t be making the dress. I think I would cut away the front legs a bit too. 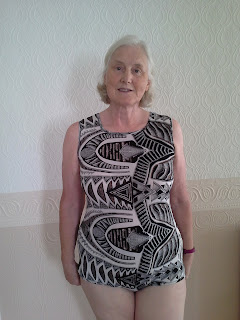 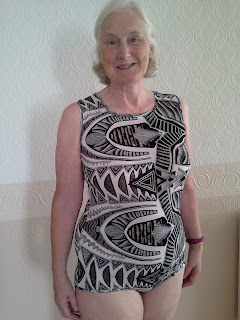 In the class I was also making a simple top from stretch jersey, using a commercial block. This wasn’t really very successful - I didn’t like the fit and was going to have to make lot of changes. I wasn't inspired. The Nettie was a much better fit and Rory, my tutor, suggested that all I needed to do was to shorten the Nettie pattern and I’d have the pattern for a perfectly fitting tee. I may need a little extra ease if I use a less stretchy and more medium weight fabric. So that’s also in my plans.


Rory, btw, doesn’t feel I should have abandoned my Cashmerette Concord tee (also taken to class) so that has been resuscitated and is only nearly dead! I have a couple of changes to make but am doing so to the tee I made rather than starting again. The fabric is nice and if I can manage to salvage something that will be a bonus. I was having big issues with the sleeves - but it seems that may be salvageable. I had considered a sleeveless version but the armholes are too baggy for that. Sleeve problems have haunted me for months now - you’d have thought I’d have sorted this but regrettably not.