My plans for this weekend changed a bit.
My original plans were:

Initially, because of these plans, I travelled on my own rather than with a member of my team, who had offered me a lift. Then my other 3 team members decided not to travel down on the Saturday so I thought I was going to be on my own in the guest house;  we had a few teams though so I was going to go across to meet with the others for a meal on Saturday evening.

Unfortunately,  before I travelled, my friend cancelled our meeting. I had decided to stay on in order to meet her and also to visit the tailoring exhibition in Leeds. This was no longer attractive and I was able to cancel the extra hotel nights, so travelling home on Monday night; I had been offered a lift to the meeting on Wednesday, which I now accepted with gratitude. I could have changed to travelling on the Sunday with the others from my team but it was too late to cancel the guest house so I let it go.

Since then, though, the person who was giving me a lift has had a windscreen crack a foot long which won’t be repaired on time so I’m now driving back down to Leeds, tomorrow. At least I’m returning home on the same day. Also, I confess to being a poor passenger.

Saturday
I left home early, not to get to our golf destination and play a practice round as some of the others did,  but to get to Fabworks in Dewsbury which closes at 2pm  on a Saturday.
I drove through some pretty thick fog but the journey was okay, despite extensive roadworks.
Fabworks was great and I’ll return in the future. 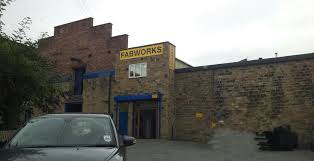 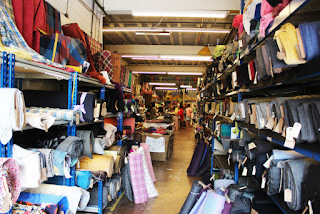 I arrived in enough time to allow a good look around. I didn't get any silk organza or silk satin, as planned, as they only had silk chiffon (at a very good price but I didn't get any as it was all patterned). I did buy a lovely, fine dusky pink wool,  for a shirt dress, some printed ‘denim’ and a contrasting lighter piece of cotton, a sweater knit, fabric for a shirt and a bag of woollen fabric, paid for by weight. I haven't photographed the woollen fabrics - they're mainly grey and variants. I had said to one of my sewing buddies that I'd try to get some faux leather binding but I didn't see one that was suitable.. I could have bought a lot more but I did have to exercise some restraint! They're going to have a website soon so presumably it'll be possible to buy online. 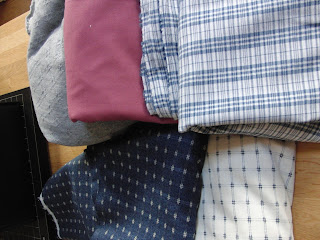 I then planned to 'pop' into Lucky Fashions and the market before going to visit Yorkshire Sculpture Park in the afternoon,  probably having a late lunch there. Quite an adventurous timetable. More so as I hadn't been able to find an actual address for Lucky Fashions but I did have the map provided by Ali of Thimberlina for a Yorkshire Spoolettes meetup, though the street wasn't named on the map. I’d also read the blog post by Love, Lucie, which included the map. Ali had also been kind enough to contact me when I said I might be going. She's also a golfer.


I got lost a bit on the way to the market area but then parked right outside a shop I'd heard about - £1 a Yard Fabrics. 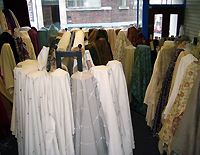 I bought some shower proof wool and fabric (some of it Burberry, not photographed) and some linings. I liked this shop a lot. Good prices - though only the lining was £1, though that’s far cheaper than I usually pay. The patterned fabric is one of the shower proof fabrics, with a matching plain fabric. I haven't photographed the waterproof wool or the other two lining materials I bought. 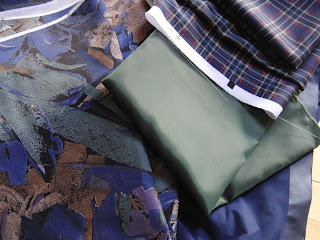 I bought in metres. I had thought it was ‘the law’ to sell goods in imperial quantities but he told me a story about that - were the local bobbies going to stop McDonald’s trading for selling a ‘quarter pounder’? The owner, who told me that Dewsbury is a dying town and so is very interested in any business going his way, indicated he's happy to deal by mail,  sending samples and popping orders in the post. One of the linings I got was a plaid so that I could practice with that. I will return some day.

I had a wander through the market. I saw a couple of fabrics I liked but when I asked the price,  the stall holder offered to make me a complete (Indian type) outfit for £15. Obviously,  I didn't have time for that  but didn't get a price just to buy the fabric;  I guess it would have been inexpensive. A lot of the stalls sold Asian fabrics. I wasn't sure which of the fabric stalls was owned by Lucky Fashions;  I was going to ask the way to the shop.


I knew that the shop was close to Wetherspoons - well I found that I was parked near that - consulted the map - and I found I was parked just a few yards from Lucky Fashions! No pictures, Im afraid. This shop is only open on market days,  Wednesday and Saturday. I'm glad I found it as this was my favourite and the owner was extremely helpful. Yes,  I bought a few pieces - it's just as well I had the car, even if that was full of golf clubs, trolley, cases etc. I bought an Asian silk and a lace overlay in deep fuchsia pink, combination practice and garment for me, a couple of stretch laces for practice, a jacquard fabric, and a couple of other pieces for trousers and a tunic top. The plain navy is not in photo. 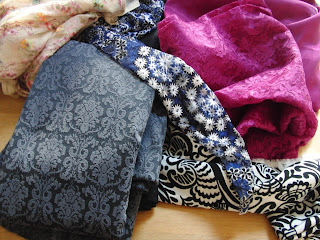 The owner has a policy that she treats customers the way she'd like to be treated; she was extremely helpful,  often suggesting I needed less than I had planned to buy and checking what I would make with a particular fabric, and my skill level. She gave me her details in case I ran into any problems. These are the fabrics I'm most excited about sewing.

I've posted a couple of photos in case anyone is interested. I do need to find a foolproof way to catalogue and store my fabric. The only photo I took the whole weekend was of a wild flower at Oulton hall!

The weather was still bit misty and overcast on Saturday afternoon, with some ominous black clouds, (which didn't come to anything) and I decided against going on to the Yorkshire Sculpture Park to see the Poppies. So I had a late lunch in Wetherspoons, which was very reasonably priced. Dewsbury may be dying but I found everyone very friendly and helpful.

By this time, I decided to make my way to my guest house. The plan was that I was going to meet some of the others for dinner in their hotel. I thought I'd have time to change etc. Well, as I drove into the car park, I was suddenly surrounded by kent faces - one of our other teams (of 4) was staying in the same place. So we went out for a meal in a local pub (on foot) and I was able to have a glass of wine as I cancelled my proposed drive to the Premier Inn. So that worked out very well.

Sunday/Monday
It’s all about the golf - end of season team event. Northern (Northumberland, Cumbria, Yorkshire, Lancashire, Durham, Cheshire) county Vets - that is, ladies of 50+.
We were very lucky with the weather. No rain. some sunshine, though cold on Monday.
Nice course
Nice company
Great chat
Great evening get-together
Good room
Good breakfast
My team did well on the second day, enough to win our internal Northumberland second day sweep (we had 6 teams of 4 entered) but not enough to have an overall place in the competition, though we were top of the leaderboard right until the end. That doesn’t matter, though, as it was about social golf.

We were out early on Monday so finished reasonably early.

On the way home I popped into an outlet centre but only bought a coffee and cake and 4 chocolate skeletons for my grandsons.
I confess I did try on 3 items - a dress, a top and a tunic, but none of them worked.
Because of my stop, I ran into some rush hour traffic but this wasn’t a huge issue.

David didn’t go crazy about the amount of fabric I bought!  I do need to get sewing though, otherwise I have enough fabric to outlive me. I still want to buy some practice fabrics for the wedding and some Pont Roma. I didn’t make it to the Knitting and stitching show at Alexandra Palace which was on this past weekend but I’m still trying to decide whether to go to the Harrogate event.


And getting stuff ready for AGM tomorrow. Of course, I have to drive now, which I do find rather exhausting so early to bed it is tonight! I'm giving someone else a lift so won't be going to the tailoring exhibition tomorrow - I may have to take a train trip down.